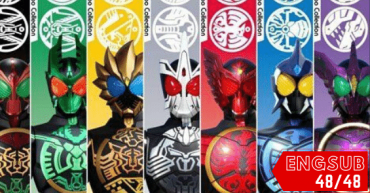 Kamen Rider OOO is a 2010-2011 Japanese tokusatsu drama in Toei Company’s Kamen Rider Series, being the twelfth series in the Heisei period run and the twenty-first overall. It began airing on September 5, 2010, the week following the conclusion of Kamen Rider W, joining Tensou Sentai Goseiger and then Kaizoku Sentai Gokaiger in the Super Hero Time lineup,

until its conclusion on August 28, 2011. The series’ titular Kamen Rider made a cameo appearance in the film Kamen Rider W Forever: A to Z/The Gaia Memories of Fate and a supporting character in other Kamen Rider movies.

Eiji Hino is a traveling man who has no place to call home and a tragic past. When metallic creatures known as the Greeed awaken after their 800-year slumber to attack humans and feed off of their desires, the disembodied arm of the Greeed named Ankh gives Eiji a belt and three Medals to fight the other Greeed as Kamen Rider OOO.

The mysterious Kougami Foundation approaches Eiji and begins assisting him in his fight against the Greeed, though their true motives are not clear. As Eiji fights the Greeed and their Yummy monsters, learning more of the Greeed and Ankh, he starts to find a purpose beyond his journey

whats up with episode 49