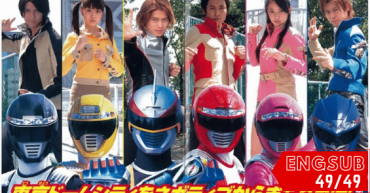 GoGo Sentai Boukenger  is the 30th series in Toei’s Super Sentai series, a metaseries of Japanese tokusatsu programming. It is the first installment to be broadcast in 16:9 aspect ratio. It premiered on February 19, 2006 at 7:30 JST on TV Asahi. Its footage was used in the American series, Power Rangers Operation Overdrive, while the original footage was dubbed into Korean for the South Korean series, Power Rangers Treasure Force

Powerful relics known as Precious have started to appear throughout the world. However, the various Negative Syndicates wish to take the Precious for themselves and utilize them for evil means. To make sure that the Precious do not fall into the hands of the Negative Syndicates, the Search Guard Successor Foundation has developed its own special operations team, the Boukengers, to do battle and collect some of the more dangerous Precious.