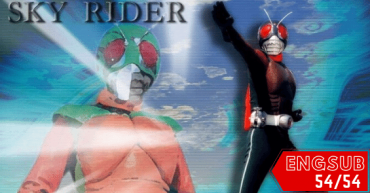 Kamen Rider Skyrider is a Japanese tokusatsu television series. It is the sixth program in the Kamen Rider Series. It has the same name as the first series in the franchise, and fans usually refer to this series as The New Kamen Rider  or Skyrider  in order to distinguish it from the original. The series was broadcast on MBS from October 5, 1979 to October 10, 1980. The series was a co-production between Toei and Ishinomori Productions, and was created by Shotaro Ishinomori. It aired every Saturday at 7:00 PM.

The New Kamen Rider was intended as a revival of the original Kamen Rider, going back to the basic, essential themes established in that series, as opposed to the more complex and unique series that came before it, such as Kamen Rider Amazon and Kamen Rider Stronger.

Doctor Keitarō Shido, an acclaimed scientist, has been kidnapped by the terrorist organization Neo-Shocker in order to exploit his expertise in robotics technology. Desperate to escape, he convinces Neo-Shocker command to allow him to operate on an injured camper.

Explaining that he can turn the camper, Hiroshi Tsukuba into a powerful Neo-Shocker warrior, they allow Doctor Shido to operate. However, he quickly turns the tables on them, transforming Hiroshi not into a kaijin, but into the powerful warrior Skyrider, using his newfound abilities to combat the evil Neo-Shocker menace.