Kamen Rider Agito  is the eleventh installment in the popular Kamen Rider tokusatsu franchise. The series represented the 30th anniversary of the Kamen Rider Series. The series was also a joint collaboration between Ishimori Productions and Toei and was shown on TV Asahi from January 28, 2001 to January 27, 2002. 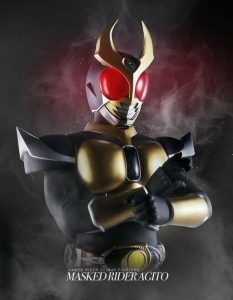 The series served as an indirect sequel to Kamen Rider Kuuga and the first Kamen Rider series to not have an ending sequence.

A man named Shouichi Tsugami has no memory of who he was, where he came from, or how he came upon his peculiar circumstances to transform into a powerful superhuman, Kamen Rider Agito, whenever in the presence of the beings referred by the police as the “Unknown”. 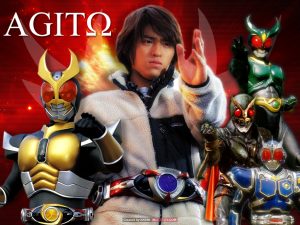 Known as the Lords, these powerful monsters perceived themselves as humanity’s defenders and kill certain people in a series of murders that force the police department to make Makoto Hikawa the user of the Kamen Rider G3 powersuit which was modeled after Kamen Rider Kuuga. Shouichi and Makoto, both initially hesitant of the other at first, are joined by Ryō Ashihara, who becomes a pre-Agito known as Kamen Rider Gills and seeks the truth behind his father’s suicide. These mysteries and many others collide as the true nature of Agito would ultimately determine the fate of humanity.