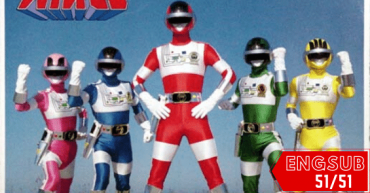 Choudenshi Bioman is Toei Company’s eighth installment in the Super Sentai metaseries. Its 51 episodes aired on TV Asahi from February 4, 1984 to January 26, 1985 with a movie being released during the show’s initial run. 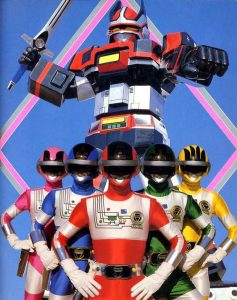 The once prosperous Planet Bio (バイオ星, Baio-sei) is destroyed after a world war erupted over the use of a scientific discovery called “Bio Particles”. The Planet Bio Peacekeeping Alliance (バイオ星平和連合, Baio-sei Heiwa Rengō), which sought to use Bio Particles for peaceful purposes, sends the giant robot Bio Robo and an assistant robot named Peebo to prevent the same tragedy from happening on Earth.

Bio Robo arrives in 15th century Japan, where it showers Bio Particles on five young individuals. Five centuries later, the descendants of these individuals, infused with Bio Particles, are chosen by Peebo and Bio Robo to become the Bioman team to protect the Earth from the Neo-Empire Gear, an organization led by mad scientist Doctor Man.