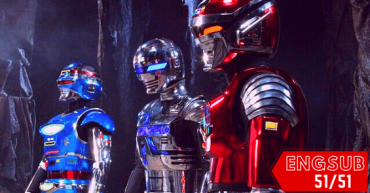 Uchuu Keiji Sharivan – Space Sheriff Sharivan (宇宙刑事シャリバン, Uchū Keiji Shariban) is the second installment in Toei’s Metal Hero Series franchise and aired on TV Asahi from March 4, 1983 to February 24, 1984. It served as a direct sequel to its predecessor, Space Sheriff Gavan and featured many of the same characters.

For distribution purposes, Toei refers to this television series as Space Guardian Shariban.

Initially appearing in Space Sheriff Gavan, Den Iga is attacked by a monster called Buffalo Doubler, member of the Space Mafia Makuu. Den is seriously injured in the attack when he is found by Gavan, who takes him to Planet Bird for medical assistance. Qom, leader of the Galactic Union Police, is impressed by Den’s courage.

Den returns in the final episode of Gavan, saving Gavan himself in his newly acquired form of Space Sheriff Sharivan during Gavan’s final battle. After Don Horror is defeated, Sharivan is assigned to Earth and is partnered together with Lily from the planet Bird as he deals with the threat of the Madou Space Crime Syndicate on Earth.

Why i can’t play with uc browser?

You can try with Chrome Browser.

Why its not working

Which episode or all episodes?

Only episode 7..thanks for the response