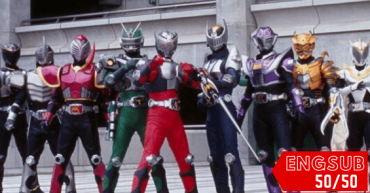 Kamen Rider Ryuki is a Japanese tokusatsu television series. The twelfth installment in the Kamen Rider Series of tokusatsu shows, it was a joint collaboration between Ishimori Productions and Toei, and it was shown on TV Asahi from February 3, 2002 to January 19, 2003. The series marked the franchise’s switch from Columbia Music Entertainment to Avex Group, which continues to produce music for the Kamen Rider Series today.

In 2009, Ryuki was adapted into the American television series Kamen Rider: Dragon Knight, the first adaptation of a Kamen Rider Series in the United States since Saban’s Masked Rider in 1996.

Thirteen Card Decks (カードデッキ, Kādo Dekki) were created for thirteen Kamen Riders. They make Contracts with monsters from the mysterious Mirror World (ミラーワールド, Mirā Wārudo), a parallel dimension opposite to our own in which only the Kamen Riders can exist. The Riders draw on their monsters’ strength in exchange for feeding them the life force of the creatures they destroy. The creator of the Advent Cards (アドベントカード, Adobento Kādo) has only one rule: that there can be only one Kamen Rider. The others must be killed, and the sole victor will be granted a single wish, which leads to a conflict known as the Rider War.

All over the city, innocent people are being mysteriously abducted, never to be seen again. During his investigations of these incidents, Shinji Kido – an intern at the online news service ORE Journal – discovers one of the Advent Card decks at an apartment where every reflective surface has been covered by newspaper. He is soon sucked into the Mirror World, discovering the terrifying truth behind the disappearances: people are literally being pulled through mirrors by the monsters of the Mirror World so that they may feed. He is about to be killed by a powerful dragon named Dragredder when he is saved by a Kamen Rider Knight: Ren Akiyama. Ren seeks to win the Rider War at all costs. He works with a young woman named Yui Kanzaki, who seeks her missing brother: the master of the Rider War, Shiro Kanzaki. Seeing Ren’s strength, Shinji enters the Rider War not for the prize, but so that he may protect innocent people from the threat of the Mirror World, and stop the senseless fighting between the Kamen Riders. With Dragredder as his Contract Monster, he becomes Kamen Rider Ryuki.

He discovers that there are some people who cannot be saved, and that he must sometimes fight in order to stop the fighting. The extent to which he must go if he want his deepest wish to come true, and the sacrifices that he must make. In the end, there can be only one Kamen Rider.