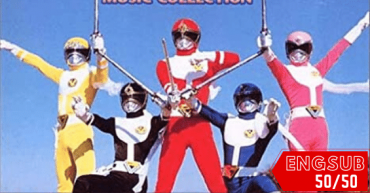 Dai Sentai Goggle-V is a Japanese tokusatsu television series. It was the sixth installment in Toei Company’s Super Sentai metaseries of tokusatsu television dramas. It aired on TV Asahi from February 6, 1982 to January 29, 1983, with a total of 50 episodes. Its international English title as listed by Toei is simply Goggle V

The Dark Science Empire Desdark launches its scheme for world conquest from their Destopia Castle in Germany. Dr. Hideki Hongo, founder of the Future Science Laboratory, is saved from one of their attacks by world class explorer Kenichi Akama. Using his Computer Boys & Girls, Hongo recruits five people, including Akama, to form the Dai Sentai Goggle-V (Goggle 5), the only force capable of stopping Desdark.