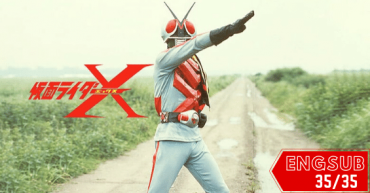 Kamen Rider X  translated as Masked Rider X, is a Japanese tokusatsu superhero television series. It was broadcast in 1974 on the Mainichi Broadcasting System and NET, now known as TV Asahi. It is the third entry in the Kamen Rider Series of tokusatsu shows. It starred Ryo Hayami in the title role.

Robotics scientist Keitaro Jin and his son Keisuke become caught up in the campaign of terror by an evil organization known as “G.O.D.”. They are attacked and the professor’s technology gets stolen, but before Keitaro dies, he is able to perform surgery on his son.

With the last of his robotics technology, he transforms his son into “Kamen Rider X”. To avenge his father’s death and ensure the safety of the entire world, Keisuke uses this technology as he battles the monstrous minions of G.O.D.

The timing of the subs is way off for episode 25

Fixed it. Thank you letting us know.

Because Kamen is Masked in Japanese, that’s why

hey ep 4 and 10 seem to be down. Please please look into getting them back up this is the greatest show ive eveer seen

episode 32 got the wrong subtitles not complaining just saying

episode 32: timing of the subtitles is way off.

What happened to the subs from Episodes 24-35?!

They all have incorrect English, poor grammar, and some subtitles are timed wrong or jammed together.

Not to mention the out of sync timing of the subtitles.

thats true i see it my zelf

their HK subs so yeah their not going to be pretty