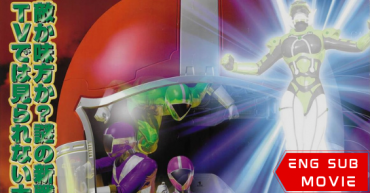 A gold-armored and helmeted alien hunter named Jiku arrives on Earth to stop a monstrous alien from the Jyuma Clan named Golmoa (as spelled on the fan-subbed tape I viewed for this review) from finding the Dark Sword’s hiding place. To find the sword, Golmoa seeks the help of the Saima Clan, the series’ regular villains, and promises to use his new powers to help them achieve their goals. A battle with Golmoa elsewhere in the galaxy had previously left all of Jiku’s fellow hunters dead, so he’s pretty intent on stopping Golmoa. The grotesque creatures of the Saima Clan, plus their one human-looking member, Venus, agree to help out.

The five siblings who make up the costumed GoGoFive sentai team get involved when they’re summoned to stop Golmoa, after he’s first shown up to wreak havoc, and encounter Jiku as well. Also along for the ride is Kyoko, the female astronaut the team met in their first TV episode and who now wants to join their team any way she can. Kyoko eventually gets her wish, thanks to her resemblance to one of Jiku’s fallen comrades, when a wounded Jiku transfers his power to her so that she can transform into a new gold-armored super warrior and join GoGoFive in their battle with a newly empowered, giant-sized Golmoa. There are some interesting metaphysical elements in all of this, such as when Kyoko, carrying Jiku’s essence, enters the GoGoFive team’s “Prominence Sword” to give it new power. Jiku had also advised Kyoko, “Tell the warriors of Earth that their spirit is the strongest power.”