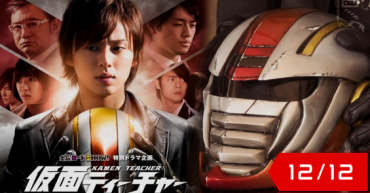 Kamen Teacher is a Japanese manga series written and illustrated by Tooru Fujisawa. It was serialized in Shueisha‘s Weekly Young Jump magazine from 2006 to 2007. The special for this film was broadcast by NTV on February 14, 2014, on Kinyou Roadshow. So happy to see Kamen Teacher in here!