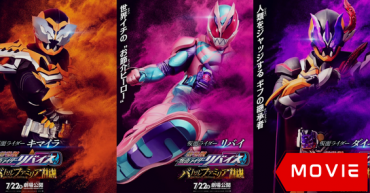 In the film, Ikki, Daiji, and Sakura travel to the forbidden Area 666 to rescue the kidnapped victims of an airliner from the dangerous criminal known as Azuma, who wishes to judge the fate of humanity himself. The film also features an early-bird appearance from Kamen Rider Geats ahead of his in-series debut.

An hijacking incident has occurred! Genta and Yukimi, alongside several other passengers have been kidnapped by the criminal named Azuma and taken to the forbidden land known as Area 666. The Igarashi siblings rush to save the hostages, but are met with Azuma, who transforms into Kamen Rider Daimon with a strange belt in his hand. He attacks the Igarashi siblings with the intent of judging humanity himself.

The mysterious scientist Soutomi, who was kidnapped alongside Genta and Yukimi, then reveals a great secret within the Igarashi family and hunts them down, while setting up a trap that prepares them for their greatest crisis ever.

At the end of the fierce battle with Azuma, what will become of the ultimate buddy that Ikki and Vice have? Will it shatter or transcend into an unwavering bond?

the CGI are better than marvel movies nowadays.

I like the action though it’s as good as heck

When is the english sub gonna be here?

I’m gonna wait for the engsub

Where are the eng subs?

Cant wait for the sub, i have waiting for this. LETS GOOOOO