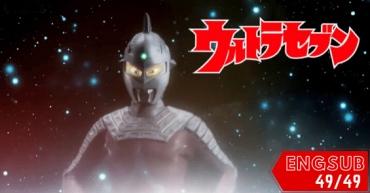 Ultra Seven is a Japanese tokusatsu science fiction television series created by Eiji Tsuburaya. Ultra Seven is the third installment in the Ultra Series and was produced by Tsuburaya Productions and aired on Tokyo Broadcasting System from October 1, 1967 to September 8, 1968.

In the not-too-distant future, Earth finds itself constantly under attack from extraterrestrial threats. To combat them, the Terrestrial Defense Force establishes the Ultra Garrison, a team of six elite members who utilize high-tech vehicles and weaponry. Joining their fight is the mysterious Dan Moroboshi who is secretly an alien from the Land of Light in Nebula M-78 and transforms into his true alien form, Ultraseven, in times of crisis.