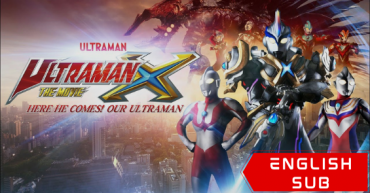 Ultraman X The Movie: Here He Comes! Our Ultraman is a 2016 Japanese tokusatsu movie based on and set after the series Ultraman X.

Ultraman X The Movie: Here He Comes! Our Ultraman

On December 5, 2016, William Winkler Productions Inc., announced that this film and Ultraman Ginga S The Movie: Showdown! The 10 Ultra Warriors! to be English Dubbed and played as a “Double Feature” at theaters and conventions across the United States.

Ultraman X The Movie: Here He Comes! Our Ultraman – The Movie

The movie begins with recaps of past events from the series. Returning to the current storyline, Alien Fanton Gourman narrates the story of Ultraman fighting for peace in the galaxy. During the narration, he flashes to a certain battle Ultraman had participated against Alien Baltan. Back to the present, he is disgruntled that Rui and Mamoru did not hear his story, since the two had heard of it before multiple times but soon catches their attention by showing them his newest invention: a replica of the Beta Capsule.

Ultraman X The Movie: Here He Comes! Our Ultraman – The Movie 2016

Using this, Gourman tries to summon the original Ultraman but fails and created a huge explosion in the lab as a side effect, so much so that Rui commented: “Maybe that needs a little more fix?” After the movie’s introduction title, Xio members celebrated Daichi’s return from his monster observation in Australia. Captain Kamiki even presented them with cookies made by Hiromi, hinting the captain’s relationship with his daughter started to anew. X advises Asuna not to eat too much, concerning her body weight but she ticks this off and flips the X Devizer to keep X quiet. Deputy Captain Sayuri entered and chew them off including the captain for eating during their job until they received a distress call from the Baraji Ruins, an ancient civilization area where a mysterious pyramid was discovered a long time ago.