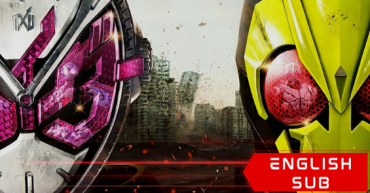 Serving as a tribute to the original Kamen Rider series, Sougo travels to the World of Zero-One to assist Aruto in fixing the damages caused by a Time Jacker, while Aruto learns of his family’s history as well as his own powers. Kamen Rider Thouser makes a brief appearance in the film before his in-series debut.

Aruto Hiden wakes up from a dream he had of the Daybreak Town Accident. Realizing that he was late, he hurriedly rushed out of his apartment for Hiden Intelligence, spotting several types of Humagears he didn’t know existed on the way.

Arriving at the building, Aruto is subdued by the Humagears in the building and is shocked to discover that there was a new CEO, Will, who attacks him as Another Zero-One.

At Hikarigamori High School, Tsukuyomi poses a question to both Sougo and Geiz, asking them what they’d do should the world end. Upon reaching their classroom, they discover that all the faculty and students were robots, who were teaching themselves their revolution against humanity.

After their teacher and the students deduced the trio to be humans, they move in and attack them, but Woz arrives and rescues them, later restoring their memories.

Aruto is thrown out of the building and activates his Driver, but the Rider Model mystically appears from the ground. He transforms into Zero-One to fight him, but his powers were sapped away shortly and his Driver taken.

With no choice left, Aruto runs from the Humagears attacking him in public led by the Berotha Magia and Okureru as the Kuehne Magia. He was later rescued by Isamu Fuwa and Yua Yaiba and taken to the human resistance.

After meeting Izu, who explained that there was a temporal disturbance in their universe, a platoon of Humagears led by Will, Horobi, and Jin began to raid the resistance base. Wanting to help fight, Soreo Hiden gives him a Forceriser, allowing him to transform into Kamen Rider Zerozero-One.

In the midst of the resistance’s defeat, Zi-O’s team arrived and were successful in driving the Humagear force back. After explaining that the cause of this was due to Finis, a Time Jacker, Aruto goes back to 2007, 12 years in the past with Zi-O’s team.