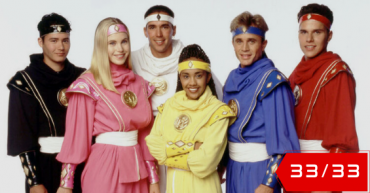 Season three picks up directly where season two left off, with the Rangers facing off against Rita Repulsa and Lord Zedd. The season premiere features a crossover between the Power Rangers and Masked Rider. This season introduces Rito Revolto & Master Vile, respectively, Rita’s brother and father. He aids Zedd and Rita in destroying the Rangers’ ThunderZords and causing the Rangers to search and obtain Ninja Powers from, Ninjor, the original creator of the Power Coins. Katherine Hillard (Sutherland), initially under a spell cast by Rita, becomes a new friend of the Rangers and the new Pink Ranger, as Kimberly (Johnson) decides to move to Florida with a professional gymnastics coach to train for the Pan Global Games. Bulk and Skull (Schrier and Narvy) give up their search to find the Power Rangers’ identities to become police officers. The season ends with the rangers being turned into kids, and the story continues in Mighty Morphin Alien Rangers and then Power Rangers Zeo. and the movie Turbo: A Power Rangers Movie