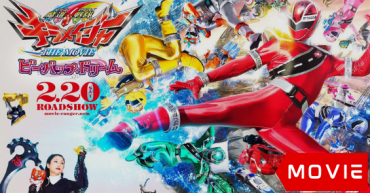 On March 8, 2020, Mashin Sentai Kiramager: The Movie was announced to premiere double-billed alongside Kamen Rider Zero-One: The Movie

on July 23, 2020.  However as a result of the ongoing COVID-19 pandemic that delayed the filming of Kiramager, the film’s release was ultimately postponed.

On June 22, 2020, Toei announced that both Zero-One and Kiramager’s summer films would be postponed until a new release date can be determined. With Zero-One’s film confirmed to premiere in December alongside Saber’s film

, Kiramager’s film was postponed to premiere triple-billed with two additional films based on Kishiryu Sentai Ryusoulger and the “new Super Sentai” (later revealed to be Kikai Sentai Zenkaiger) on February 20, 2021.[4]. A poster was revealed, leaving Zenkaizer silhouetted until Zenkaiger’s announcement press conference, when the poster was updated to show all three.