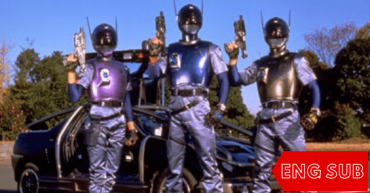 Blue SWAT  is the thirteenth installment in the Metal Hero Series franchise. It ran from January 30, 1994 to January 27, 1995 for a total of 51 episodes and one theatrical film, aired as part of the 1994 Manga Matsuri, which compiled episodes 1 and 2.

Blue SWAT deviated from the Metal Hero trend by using a realistic vibe for the series instead of fantastic, over-the-top action by focusing on the martial arts and gunplay aspects of the series. While the mood of the series appealed to the genre’s adult fanbase and older viewers, the show was not well received by children, which resulted in a change into a lighter tone midway through the series. The Blue SWAT team later appeared for a special team-up in the final episodes of Juukou B-Fighter

When Earth is tearing itself apart by means of crime, pollution and war, aliens choose the time to invade, taking advantage of the lowering of everyone’s guard. The Japanese government establishes an elite police organization known as Blue SWAT to combat the aliens, known as the Space Mafia. The aliens attack by possessing humans to obtain their goals. When an alien possesses the chief of the Blue SWAT unit to infiltrate the organization, it manages to completely demolish their building of operations and murder all but three SWAT members; Sho, Sara and Sig.

Managing to keep the suits and equipment assigned to them, the three form their own private detective-like agency called Blue Research to continue their mission of defeating the Space Mafia. Now working on their own, their battle with the Space Mafia is only beginning…

Berndadelta Subs redid the series from episode 1 to 18 so can you uploaded for us please?

Tokuzilla could you update all metal heroes episodes with sub

We will update the new episode when there is an English sub. Please wait.

We will update the new episode when there is an English sub.

the audio is all messed up

Fixed it. Thank you!